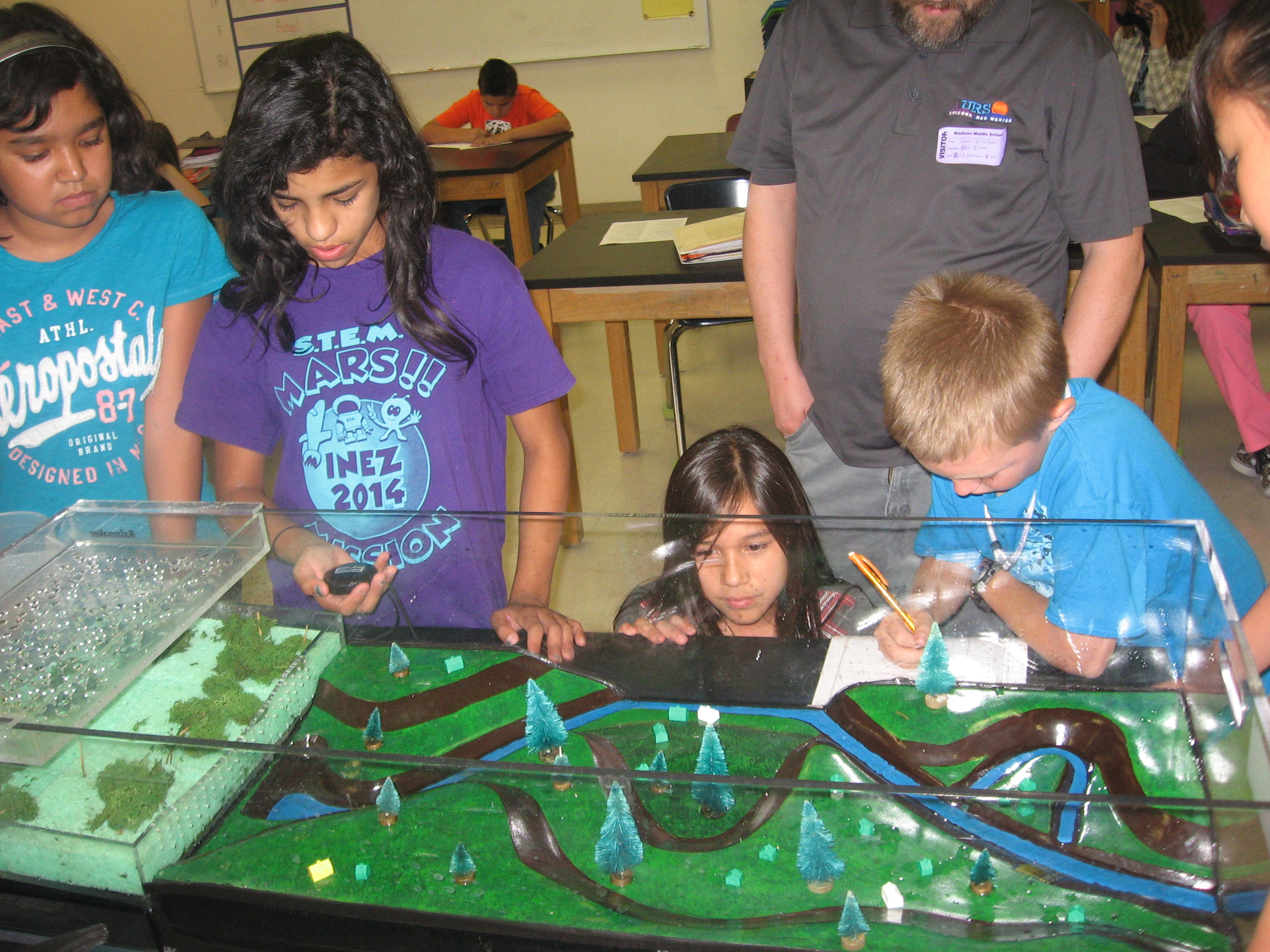 In preparation for the visit, Mr. Sean O’Melveny, corresponded with Mr. Nicholas Porter and Mrs. Chanel Bencomo; both 6th grade science teachers at Madison to set up the visit and set expectations.  As part of the preparation for having the Floodplain Simulator in the class, Mr. Porter and Mrs. Bencomo discussed some of the terms used in floodplain management with the students.  This was done by using the glossary of terms provided with the Floodplain Simulator.    The day before preparation some discussion of the recommended classroom activity #2 “The Fate of Rain” from Flood Model Manual provided with the Floodplain Simulator.  The students also watched a brief video from the Discovery Channel on flooding.  Mr. Porter also prepared a word search and crossword puzzle using terms from the glossary.

The teacher briefly introduced Mr. O’Melveny and broke each class into groups of five to six students.  Mr. O’Melveny then asked the students some questions about what they remembered from the previous day’s discussions and pointed out features on the model.  Mr. O’Melveny related the model to the real world watershed of students attending Madison.

Following each run, Mr. O’Melveny and the teachers had the group determine the Amount of Water that stayed in the model and the Runoff Footprint.  The group also discussed the general observations made.

While students were waiting on their turn at the model, they worked on the flooding word search and crossword puzzle that Mr. Porter had created.

After all 5-6 groups per class had participated, Mr. O’Melveny then had the groups present their results.  This lead to a general discussion on how the two headwaters were different and how that affected flooding.

Following this general discussion Mr. O’Melveny presented a final run of the parking lot scenario to the whole class, so all students could see the model in action.

After this demonstration, Mr. O’Melveny lead the class in possible ways to mitigate flood hazards.  The main ideas brainstormed by the students were:

Mr. O’Melveny then passed out cards to NMFlood.org to interested students so that they could learn more.

Other items to note:

Mr. Porter had a projector which would capture the events inside the model from a bird’s eye view and show them on a screen so the whole class could see what was happening.  This was extremely useful to allow some students to see what was going on.

Mr. Porter’s 5th period class was smaller than the other classes.  With this extra time the “retention pond scenario” from recommended classroom activity #4 was also demonstrated.

Mr. Porter’s 6th period class reviewed the National Flood Hazard Layer in Google Earth to see what flood hazards impacted Madison.  It was discovered that the Science Building of the Middle School is actually in a Zone AO floodplain.  It was also pointed out where a retention pond was located next to the school.  This exercise helped bring the discussion home to the students.

As a follow-up activity, Mr. O’Melveny made Hydrograph Worksheet available to Mr. Porter and Mrs. Bencomo so that the students could graph their results.

Want to join the discussion?
Feel free to contribute!